Please assign a menu to the primary menu location under menu

7 Best Things to Do in Copenhagen, Denmark

Denmark’s capital, Copenhagen, is considered by many to be the coolest and hippest city in Scandinavia. With its fairytale castles, cute canals, and edgy bars, it’s not hard to see why. On top of that, Copenhagen’s status as the world’s number one bike capital means you’ll be able to experience the city from a whole new – and much more fun – perspective. And while it’s no secret travelling in Denmark is not exactly easy on the pocket, Copenhagen is worth every single cent. Here are the best things to do in Copenhagen that you can’t miss!

Insider Tip: If you plan to do a lot of sightseeing while in Copenhagen, make sure to get the Copenhagen Card. The card gives you free admission to over 70 attractions in Copenhagen, including the Tivoli Gardens and Den Blå Planet aquarium, as well as free public transportation. Definitely worth the money.

If you want to explore Copenhagen the local way, there’s only one way to do it: on two wheels. The Danes ride their bikes to work, to university, even when they go out, and the city now officially has more bikes than cars. With great sights and restaurants, including several gluten-free options, the good news for the newbies out there is that biking in Copenhagen is actually pretty straightforward. There are bike lanes throughout the entire city, so jump on and get some kilometers in those legs!

This is, quite possibly, the most quaint castle in Copenhagen. It’s set in an equally beautiful park called Kongens Have, or the King’s Garden, which is one of the most popular local spots to hang out. Head there on a summer afternoon and the place will be full of picnicking families, tanning girls, and beer-drinking students. The castle itself was built in the 17th century and now houses the crown jewels, so if you like your bling, Rosenborg Castle is definitely one of the best things to do in Copenhagen for you.

3. Have a Beer in Nyhavn

If all this biking around starts taking its toll on you, the rescue is just around the corner from Rosenborg Castle. Nyhavn is the name of Copenhagen’s picturesque harbor, and it’s another popular local beer-drinking spot. After work, many Danes come here for a knock-off beer, which makes it an excellent spot for some good ol’ people-watching. If you’re staying at any of the best hostels in Copenhagen, the staff will be sure to point you in the right direction.

Insider Tip: If you thought Copenhagen beer prices were steep, wait till you see Nyhavn’s. To save money, just do like the locals and buy your beer from one of the kiosks and sit on the bulwark instead of at a cafe. Oh, and make sure you try a cold Tuborg!

4. Check-In on the Queen at Amalienborg Palace

Not only is the royal Danish family one of the oldest in the world, they’re also very popular. That’s why, right after having a cold Tuborg, dropping by the royal residence at Amalienborg Palace should be next on your list of the best things to do in Copenhagen. To keep things easy, the palace is conveniently located just a few streets from Nyhavn. Try to time your visit so you catch the daily changing of the guard at noon and, while you’re there, remember to take a look at the palace’s roof. If you see a flag, it means the queen or the crown prince are home. They won’t come out to take a selfie with you, but hey, maybe you’ll spot Crown Prince Frederik heading out on a bike ride (and we’re not even joking – he actually does bike around the city).

Maybe not the best idea if you’re backpacking Copenhagen, but if you’re looking to bring back some cool souvenirs from your Copenhagen trip, you should spend a few hours on Strøget. That’s the main pedestrian shopping street in the city – in fact, it’s one of the longest in all of Europe. Here, you’ll find anything from H&M to Louis Vuitton, so even travellers on tight budgets should be able to find something. Two stores you can’t miss are Illums Bolighus and Royal Copenhagen, where you’ll find some gorgeous examples of the famous minimalistic Scandinavian design.

If you could only visit one attraction in Copenhagen, this should probably be it. Freetown Christiania can best be described as an open-minded hippie village within Copenhagen where “normal” rules don’t apply. It’s a self-proclaimed autonomous neighborhood full of homemade wooden houses, making it a very interesting add-on to Copenhagen’s otherwise quite flawless image. Apart from its sheer awesomeness, Christiania is also known for being Copenhagen’s main weed supplier. If you’re in the city on a Sunday, make sure you drop by the Freetown’s popular Nemoland bar. Those guys put on free concerts with some of Denmark’s best bands and, quite frankly, you don’t want to miss out on that experience! 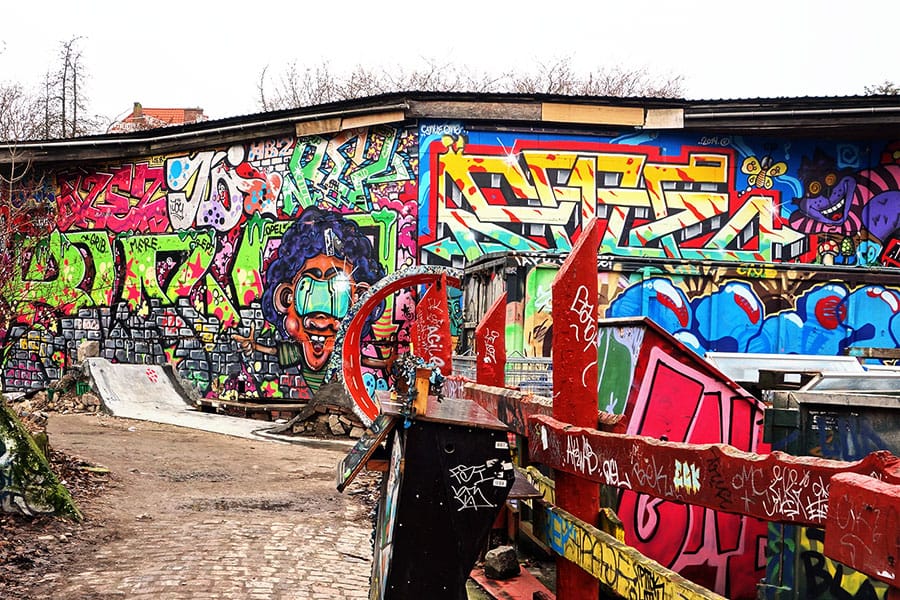 7. Say Hi to the Little Mermaid

Last, and perhaps also least, we have the world-famous Little Mermaid statue. You would think Denmark’s biggest attraction was quite a sight, right? Well…Brace yourself for disappointment. The statue was made in honor of the great Danish author H.C. Andersen who is the man behind the original and pre-Disney fairy tale about the little mermaid. That in itself is pretty cool, but here’s the thing: she’s barely a meter tall. Add that to the fact that she sits on a rock about a meter from the quay and things start to get a bit underwhelming. In saying that, the Little Mermaid is still a must-visit Copenhagen icon and, in any case, the bike ride along the Langelinie Promenade is gorgeous.

And with those wise words, we round off this list of the best things to do in Copenhagen. As long as the Danish weather gods have mercy on you, you’re in for an absolute treat in this epic city – just remember to wear a bike helmet! Oh and if you have some extra time on your hands make sure to take a day trip from Copenhagen to see some castles.

6 Reasons Why You Should Visit Geneva While in Switzerland

16 Best Things to Do in Istanbul, Turkey

6 Reasons Why You Should Visit Geneva While in Switzerland